Flowers in the Yard

I'm not up to a lot of gardening, but last fall I managed to plant some bulbs. They've been blooming over the last few weeks and brightening the place up. 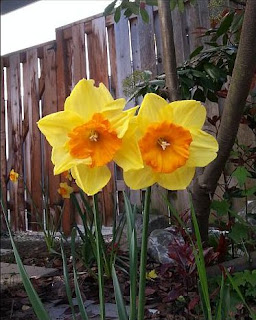 The daffodils are sunny and make the yard look bright, even when it's overcast, which it often is in Seattle. We don't have a lot of deep soil in back -- our place was built on what was originally a pretty good slope, and the builder filled with a lot of huge rocks before putting soil on top. It's deep enough for trees in a couple of places, and a few inches deep in others, and barely an inch in some. Most of the bulbs I got, like the daffodils, are fairly large, and I didn't have room for all of them. I put a few in a pot that lived out next to the front door for a while. That was cheery too. 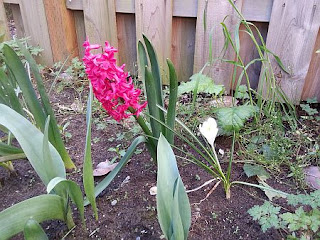 A hyacinth next to one of the last crocuses. A lot of the hyacinths grew at an angle, and some were just lying on the dirt. :P I think those were in places where I wasn't able to plant the bulbs deep enough because of the aforementioned shallow soil. There were some tipsy daffodils too. The crocuses were fine, but their bulbs are pretty small. I'll have to see if any other bulbs are about that size, and maybe get more to plant this fall, fill in some more of the shallow-soil areas. 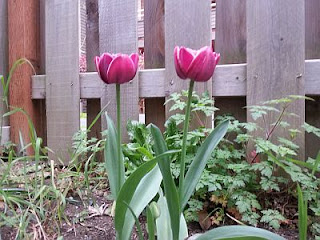 The tulips just started blooming a few days ago. They're pretty, but I didn't have too many of them. Good thing, too, since they had the largest bulbs.

Maybe I'll just throw in the towel and get some more containers and fill them with bulbs for next year. I can get whatever I want that way, and plant everything as deep as it needs to be. [ponder]

Angie
Posted by Angela Penrose at 4:27 AM

Email ThisBlogThis!Share to TwitterShare to FacebookShare to Pinterest
Labels: gardening