Wrapping up one year and starting a new one sometimes gets hectic, and life sucked me into its depths for a while. I'm surfacing, though, and doing pretty well. But in the mean time, I had a new story release in December. 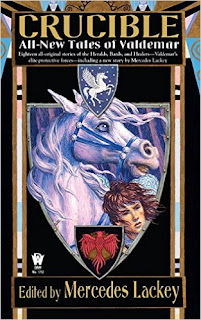 I've never written a tie-in story before, but "Ghosts of the Past," published in Crucible: All-New Tales of Valdemar, ed. Mercedes Lackey, was a lot of fun to write. I've been a Valdemar fan for a very long time; I was a regular in the Modems of the Queen board on GEnie, and have always loved the world of Velgarth and its characters and history. Getting to play in Misty's sandbox was a great opportunity, and I hope you enjoy reading it as much as I did writing it.

Four people have vanished into the woods near the village of Rabbit Hole -- gone with no sign, no body, nothing at all left. Herald Arvil heads into the woods to figure out what's happened to them and stop it. He fights through his own fear to get to whatever's been taking people, only to find himself trapped in his own past.